I have asked a few friends to help me with a little experiment.  I have asked them to put a white rose in a small vase filled almost to the top with water and add a few drops of blue food coloring. They are to make observations while the flower changes. 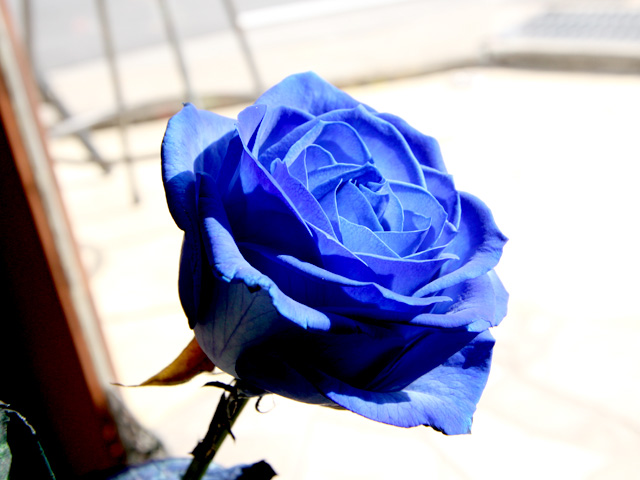 We have put it in water and left it for a few hours.
When we came back we all had the same outcome.  The flower had turned blue.

This is what we will call Scientific law.  It is the happenings of a certain experiment. If you put a flower in colored water the flower will take on the color of the water. It simply says WHAT will happen.

But why did it occur?
My friends and I believe it is because the colored water is drawn up through the flower’s stem.

This is what we call a scientific theory. It tries to explain WHY something occurs.

Just a Theory
When arguing against a scientific theory, like the theory of evolution, people will sometimes say, “but its just a theory.” That means that they do not understand that scientific theories are the strongest explanations offered by science. Theories are not scientific laws “in training,” like how bills can be ratified into laws. A scientific theory does not ever turn into a scientific law. Instead laws describe what happens, frequently with an equation, while theories explain why it happens. Theories are built on the work on many scientists who conduct many different experiments. Not all of these experiments have the same goal, but through their combined work theories are constantly revised and refined.
One example of this is the heliocentric theory. When Copernicus first wrote this theory it stated that:

Further research showed that the Sun was not motionless, instead it revolves on its axis. In addition, Kepler’s laws of planetary motion showed that the orbits of the planets are not circles, but ellipses. Instead of this theory being completely discredited as new information has been found it has been adjusted and modified according to these new observations.

What is Science?
Science is a never ending search for truth. Truth is based on a set of facts and our understanding of those facts. This understanding is based off of observations made by watching the world around us. A good scientist must be ready to accept new facts as they are discovered and modify what is “true” in light of these facts. Even though science in school is usually taught in classes that are limited to a certain area, such as chemistry or physics, science is science, no matter what topic is involved.

What is NOT Science?

Science is not based on faith, like religions, and is not individualistic, like art.  Until the 1600s, science did not exist on a large scale. Instead, people philosophized about why they thought things occurred, instead of making observations and forming conclusions based on those observations about why something occurred. Science is also not a hard truth or a certainty. Scientific knowledge is always evolving and changing as we learn more about the natural world.

Science was responsible for understanding how to make electronic devices smaller and smaller. Technology applied this knowledge to create netbooks and ipads.
What is Physical Science?

What can Science Do?
Science can answer questions when there is observable data, like “what causes tides,” and “why does sodium ignite in water?” However, science is unable to answer abstract questions such as “is there a God,” and subjective questions like “is this painting beautiful?” One question that falls in the middle of these extremes is the string theory. This theory tries to unite all of the theories of the natural world, from Newton’s theories of motion for large objects, to Einstein’s theory of relativity for very small objects. Unfortunately, this theory relies on the acceptance that all matter is made up of strings. We do not now, nor may we ever, have the ability to look for these tiny objects to prove or disprove this theory. Should it be counted as science, even though we do not have the capability to test it?

Pseudosciences are beliefs or theories that act as though they are science in order to sound more convincing. Here are some common qualities of pseudosciences:

Some pseudosciences started out as a part of a true science, but then diverged. Alchemy was original a subset of chemistry, before alchemists started making claims they could not back up with proof. Astronomy and astrology were originally founded on the same ideas, but astrology is now a pseudoscience where astronomy is a true science.

Write an essay that explains the difference between a scientific theory and a scientific law. Give examples of each. Your essay should be at least 2 paragraphs long. Remember to write in complete sentences, using appropriate grammar, punctuation, and spelling. Be sure to cite any sources that you use.