Taste testing scales. Before marketing a new food product, companies evaluate the palatability of the food item using a numerical taste test scale. For example, the Hedonic 9-point scale uses the following ratings: 1 = dislike extremely, 2 = dislike very much, 3 = dislike moderately, 4 = dislike slightly, 5 = neither like nor dislike, 6 = like slightly, 7 = like moderately, 8 = like very much, and 9 = like extremely. Another scale, called the general Labeled Magnitude Scale (gLMS) uses ratings that range from â€“100 (for strongest imaginable dislike) to +100 (for strongest imaginable like). Both of these scales were applied to food items in a study published in the Journal of Food Science (February 2014). Students and staff at the University of Florida taste-tested five food/beverage items: black coffee (BC), cheesecake (CC), grapefruit juice (GF), orange juice (OJ), and pepperoni (PP). Half (n = 200) of the subjects used the 9-point scale and half (n = 200) used gLMS to rate each of the food items. (These ratings, simulated from information provided in the article, are saved in the TASTE file.) One of the objectives of the research was to compare the average 9-point taste ratings of the five food/beverage items.

a. Explain why these data should be analyzed using an ANOVA for a randomized block design. Identify the treatments, blocks, and dependent variable for this design.

b. An Excel/XLSTAT printout of the ANOVA is shown below, followed by a multiple comparisons of food item means summary. Interpret the results, practically.

c. Refer to part b. Perform a similar analysis for the data on the gLMS rating scale. Again, interpret the results, practically. 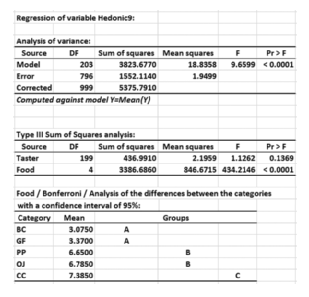