Income and road rage. Is a driverâ€™s propensity to engage in road rage related to his or her income? Researchers at Mississippi State University attempted to answer this question by conducting a survey of a representative sample of over 1,000 U.S. adult drivers (Accident Analysis and Prevention, Vol. 34, 2002). Based on how often each driver engaged in certain road rage behaviors (e.g., making obscene gestures at, tailgating, and thinking about physically hurting another driver), a road rage score was assigned. (Higher scores indicate a greater pattern of road rage behavior.) The drivers were also grouped by annual income: under $30,000, between $30,000 and $60,000, and over $60,000. The data were subjected to an analysis of variance, with the results summarized in the table. 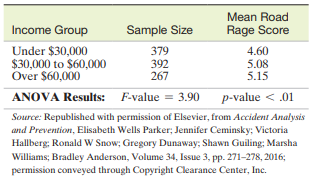 a. Is there evidence to indicate that the mean road rage score differs for the three income groups? Test using a = .05.

b. An experimentwise error rate of .01 was used to rank the three means. Give a practical interpretation of this error rate.

c. How many pairwise comparisons are necessary to compare the three means? List them.

e. Which of the comparisons of part c will yield a confidence interval that does not contain 0?