Ethics of downsizing. A major strategic alternative for many U.S. firms is to reduce the size of their workforce, i.e., to â€œdownsize.â€ The ethics of downsizing decisions from the employeesâ€™ perspective was investigated in the Journal of Business Ethics (Vol. 18,1999). The researchers surveyed a sample of 209 employees who were enrolled in an Executive MBA Program or weekend program at one of three Colorado universities. These individuals were divided into five distinct groups, depending on their job situation at a previous or current firm. The groups were named (1) Casualties, (2) Survivors, (3) Implementors/casualties, (4) Implementors/survivors, and (5) Formulators. The sampled employees completed a questionnaire on their ethical perceptions of downsizing. One item asked employees to respond to the statement: â€œIt is unethical for a downsizing decision to be announced or implemented on or prior to a major holiday.â€ Responses were measured using a 5-point Likert scale, where 1 = strongly agree, 2 = agree, 3 = neutral, 4 = disagree, and 5 = strongly disagree. Data on both the qualitative variable â€œGroupâ€ and the quantitative variable â€œEthics responseâ€ are saved in the accompanying file. The researchersâ€™ goal was to determine if any differences exist among the mean ethics scores for the five groups.

a. The data were analyzed using an ANOVA for a completely randomized design. Identify the factor, treatments, response variable, and experimental units for this design.

b. Specify the null and alternative hypotheses tested.

c. A Minitab printout of the ANOVA is displayed on the next page. Can you conclude that the mean ethics scores of the five groups of employees are significantly different? Explain. 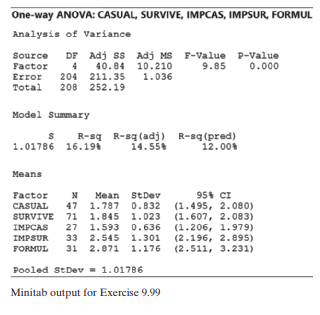 d. Access the data and check that the assumptions required for the ANOVA F-test are reasonably satisfied.

f. Refer to part e. Determine the number of pairwise comparisons for this analysis.