Lydersen and Ryg (1991) used stratification techniques to estimate ringed seal populations in Svalbard fjords. The 200 km2 study area was divided into three zones: Zone 1, outer Sassenfjorden, was covered with relatively new ice during the study period in March, 1990, and had little snow cover; Zone 3, Tempelfjorden, had a stable ice cover throughout the year; Zone 2, inner Sassenfjorden, was intermediate between the stable Zone 3 and the unstable Zone 1. Ringed seals need good ice to establish territories with breathing holes, and snow cover enables females to dig out birth lairs. Thus, it was thought that the three zones would have different seal densities. The investigators took a stratified random sample of 20% of the 200 1-km2 areas. The following table gives the number of plots, and the number of plots sampled, in each zone: 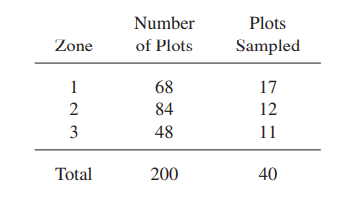 In each sampled area, Imjak the Siberian husky tracked seal structures by scent; the number of breathing holes in sampled square was recorded. A total of 199 breathing holes were located in zones 1, 2, and 3 altogether. The data (reconstructed from information given in the paper) are in the file seals.dat.

a Estimate the total number of breathing holes in the study region, along with its standard error.