The data of this exercise were gathered as part of a study to estimate the population size of the bowhead whale (Raftery and Zeh 1992). The statistical procedures for estimating the population size along with an assessment of the variability of the estimate were quite involved, and this problem deals with only one aspect of the problemâ€”a study of the distribution of whale swimming speeds. Pairs of sightings and corresponding locations that could be reliably attributed to the same whale were collected, thus providing an estimate of velocity for each whale. The velocities, v1, v2, . , v210 (km/h) were converted into times t1, t2, . , t210 to swim 1 kmâ€” ti. = 1 /vi. The distribution of the ti was then fit by a gamma distribution. The times are listed in the following table.

a Make a histogram of the remaining 210 values of ti. Does it appear that a gamma distribution would be a plausible model to fit?

b Fit the parameters of the gamma distribution by the method of moments.

c Fit the parameters of the gamma distribution by maximum likelihood. How do these values compare to those found before?

d Plot the two gamma densities on top of the histogram. Do the fits look reasonable?

e Estimate the sampling distributions and the standard errors of the parameters fit by the method of moments by using the bootstrap.

f Estimate the sampling distributions and the standard errors of the parameters fit by maximum likelihood by using the bootstrap. How do they compare to the results found previously? 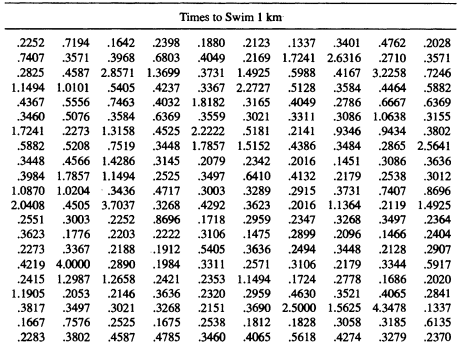