Examining the â€œMonty Hall Dilemma.â€ In Exercise 3.133 (p. 210), you solved the game show problem of whether or not to switch your choice of three doorsâ€”one of which hides a prizeâ€”after the host reveals what is behind a door not chosen. (Despite the natural inclination of many to keep oneâ€™s first choice, the correct answer is that you should switch your choice of doors.) This problem is sometimes called the â€œMonty Hall Dilemma,â€ named for Monty Hall, the host of the popular TV game show Letâ€™s Make a Deal. In Thinking & Reasoning (August 2007), Wichita State University professors set up an experiment designed to influence subjects to switch their original choice of doors. Each subject participated in 23 trials. In trial #1, three doors (boxes) were presented on a computer screen, only one of which hid a prize. In each subsequent trial, an additional box was presented, so that in trial #23, 25 boxes were presented. After selecting a box in each trial, all the remaining boxes except for one were either (1) shown to be empty (Empty condition), (2) disappeared (Vanish condition), (3) disappeared and the chosen box enlarged (Steroids condition), or (4) disappeared and the remaining box not chosen enlarged (Steroids2 condition). A total of 27 subjects were assigned to each condition. The number of subjects who ultimately switched boxes is tallied, by condition, in the table below for both the first trials and the last trial. 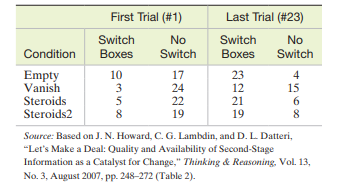 a. For a selected trial, does the likelihood of switching boxes depend on condition?

b. For a given condition, does the likelihood of switching boxes depend on trial number?

c. Based on the results, parts a and b, what factors influence a subject to switch choices?

Letâ€™s Make a Deal.â€ Marilyn vos Savant, who is listed in Guinness Book of World Records Hall of Fame for â€œHighest IQ,â€ writes a weekly column in the Sunday newspaper supplement Parade Magazine. Her column, â€œAsk Marilyn,â€ is devoted to games of skill, puzzles, and mindbending riddles. In one issue (Parade Magazine, February 24, 1991), vos Savant posed the following question:

Suppose youâ€™re on a game show, and youâ€™re given a choice of three doors. Behind one door is a car; behind the others, goats. You pick a doorâ€”say, #1â€”and the host, who knows whatâ€™s behind the doors, opens another doorâ€”say #3â€”which has a goat. He then says to you, â€œDo you want to pick door #2?â€ Is it to your advantage to switch your choice?

Marilynâ€™s answer: â€œYes, you should switch. The first door has a 1 3 chance of winning [the car], but the second has a

Â chance [of winning the car].â€ Predictably, vos Savantâ€™s surprising answer elicited thousands of critical letters, many of them from PhD mathematicians, who disagreed with her. Who is correct, the PhDs or Marilyn?